In Mumbai, Vasai is well known for its fresh fruits and vegetables, which are in great demand in the markets, but Vasai has more historical significance than its fruits and vegetables. One of my colleagues is from Vasai and used to post scenic pictures of Vasai in our WhatsApp group. Those pictures caught my attention and I decided to explore along.

On 27th February 2021, we reached Vasai station by train at 7.30 am. Vasai is on Western railway line of Mumbai's lifeline which are local trains. Any Virar bound train on western line can be taken to reach Vasai. (Later we came to know that one can also alight at Naigaon railway station to reach the fort which is more convenient). Then we took auto-rickshaws outside the station for Vasai Fort (you also get a bus near the railway station for Vasai Fort, the bus services are very good). We also explored a Koli village nearby the fort and saw trawlers making their way towards the Arabian Sea. The way to Vasai Fort is very narrow and it is amazing to see the skill of the drivers maneuvering their vehicles through such narrow lanes. 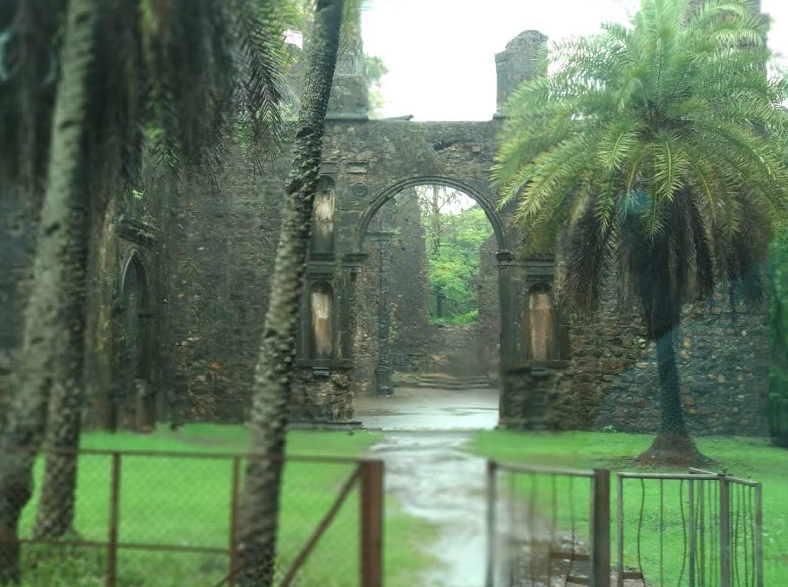 This suburb of Mumbai, also called Bassein (Bacaim) by the Portuguese, is about 40 kilometers west of central Mumbai in the Palghar district of Maharashtra. While we're obsessed with Mumbai's glitz, there's a whole other world out here. The ruins of Vasai Fort tell the story of one of the most important Portuguese forts in the west coast of India during the 16th and 17th centuries.

Vasai was the headquarter of the Portuguese, second in importance to Goa. Surrounded by sea on three sides, it had a moat filled with seawater on the landside. Its 4.5 km long strong stone wall had 11 bastions. The fort had two gates and a small citadel. It had water tanks, storehouses, an armory, etc. It also had fields where grains and vegetables were grown.

Vasai Fort was once a living city that was more important than the then backwaters of Mumbai (Bombay), when the latter were still a collection of seven islands. Vasai was famous for the exotic lifestyles of its rulers in those days.

Vasai's influence in its heyday spread to Pakistan, Oman, and other parts of the middle east gulf. It stands as a testament to India's diverse history. Soldiers, saint's artisans and residents lived there, as well as a huge township with a citadel, chapel, hospital, college, library and a busy market.

Upon reaching the fort, we discovered a small Hanuman temple built by Chimaji Appa. A very interesting aspect of this temple is the Hanuman idol with a mustache face and Peshwa turban.

Additionally, the fort has a Nageshwar temple, which was restored by the Peshwas. After their victory over Vasai fort, Chimaji Appa built a temple of goddess Vajreshwari which was also built inside the fort.

The Grand Gate of Vasai Fort 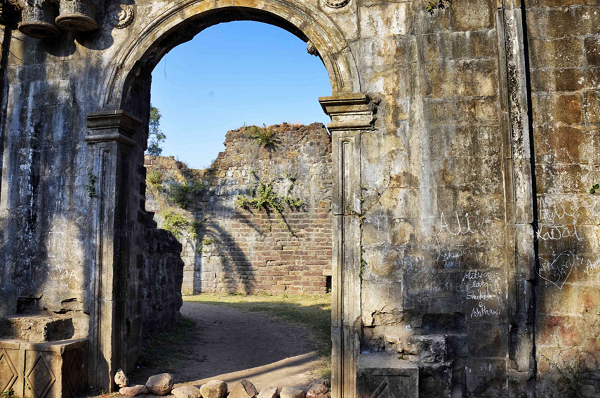 Vasai Fort was constructed in 1533 AD by Malik Tughan, the commander of Bahadur Shah, Sultan of Gujarat. In 1534 AD, the Portuguese forced Bahadur Shah to cede Vasai forever. Over the next 150 years Vasai enjoyed opulence and prosperity under the Portuguese. The Portuguese built magnificent houses, convents, churches, and an orphanage. Only Portuguese nobles were permitted to reside within the fort walls. Vasai Fort was the main naval base and a sort of shipbuilding center for the Portuguese. It was captured in 1739 AD by Chimaji Appa, Peshwa Bajirav's brother, with great loss of life. Peshwa Bajirav II signed this “Treaty of Bassein” in 1802 AD, effectively dissolving the Maratha Confederacy. The fort and city of Vasai were eventually ceded to the British in 1817 AD.

Among the most prominent remnants of Vasai Fort are three churches - the Holy Name of Jesus Church (also known as the Jesuit Church), Saint Joseph's Church and the Franciscan Church of Saint Anthony.

There is only one church left in the fort, which is located in Vasai village. The annual feast of Saint Gonsalo Garcia is still celebrated there. Saint Francis Xavier is said to have lived in Vasai.

Visitors to Vasai in ancient times who were famous foreigners

Elephants dancing in the Fort engravings

The Maratha's placed these engravings of dancing elephants throughout the fort as victory symbols. 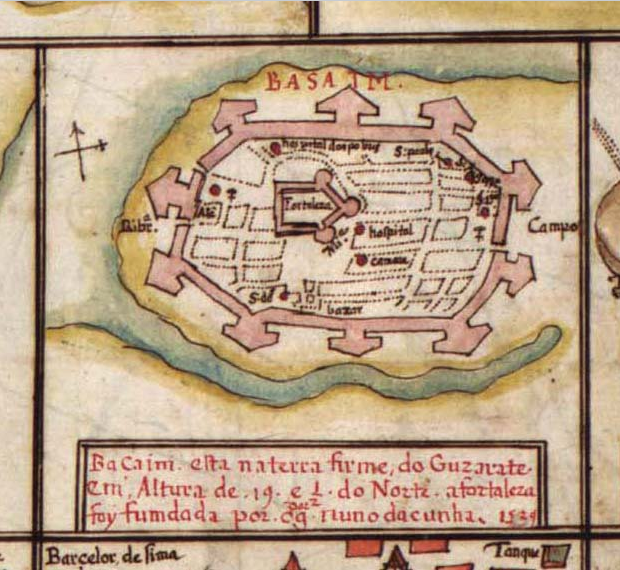 On the ramparts inside the fort's western Land Gate, there is a flat platform with a stark flagpole. It was here, on 12th May 1739, that the Maratha's led by Chimaji Appa brought down their flag.

It is worth talking about Chimaji Appa or Bhau when discussing Vasai fort. He was the son of Balaji Vishwanath Bhat and the brother of Bajirao Peshwa. In a hard-fought battle, he liberated Vasai Fort from the Portuguese, marking the pinnacle of his career as a military commander. In addition to planning all the battles for Bajirao, he ran the strategy for the Maratha Empire.

A painting of the Brave Chimanji Appa 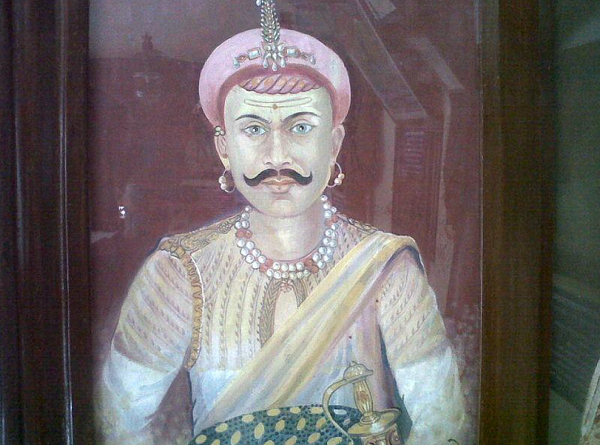 Statue of Chimaji Appa before the entrance to Vasai Fort. This monument is surrounded by a beautiful garden. 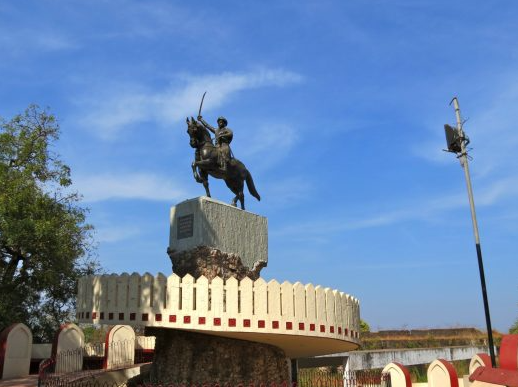 Chimaji Appa liberated the western coast of India from the Portuguese, who ruled the coast for 200 years.

Vasai, Bhayander, Virar, Thane & Palghar celebrate every year on 12th May the capture of Vasai Fort by the Marathas. Chimaji Appa is well known and highly respected in these areas.

The Taadi tree’s which are found in abundance at Vasai Fort- Villagers collect taadi from the trees in the morning and sell it locally. 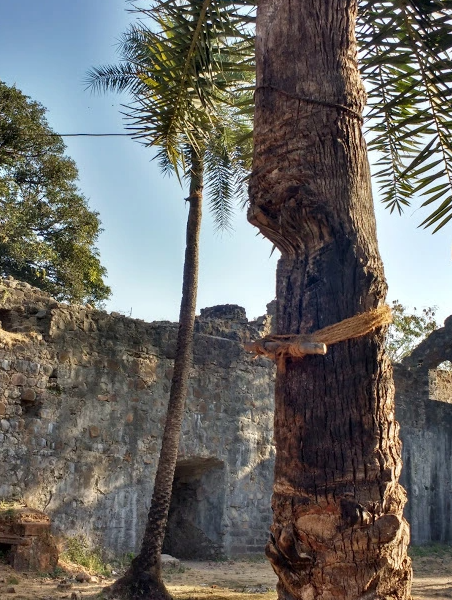 A secret tunnel runs under the Saint Sabestine Bastion. It was built in 1554 and has two entrances and two exits. The tunnel is 530 feet long. Its strategically placed windows are the only source of light, sound, and air. Pointed arrow heads once had poisoned tips on the tips, and these lethal arrows were used to instantly kill enemies who tried to enter the tunnel. As the enemy enters the tunnel, seeing the shaft of light from the window, the arrowheads are strategically positioned besides the window so that the enemy crawls towards the window and is killed.

We went to Suruchi beach after visiting the Vasai Fort, Koli Village, and the garden. We took a bus to Parnaka from the Chimaji Appa monument. From Parnaka, we hired an auto rickshaw to reach Suruchi beach. The road to the beach from Parnaka is in poor condition and is quite isolated.

There are many suru (Casuarina) trees along Suruchi beach. It is located 7.6 km from Vasai Road railway station. We reached Suruchi beach at 10 am and it was not crowded, in fact, it was pretty deserted. There were few vendors on the beach. As it was low tide that day, we were able to get a good view of the beach.

Vasai, according to legend

From 2020 to today, we have made many more trips to Vasai but this was the most memorable since it was our first trip there.

You will find the people of Vasai very friendly and helpful (in contrast to Virar locals). Friends and Mumbaites, please do visit Vasai, for its historical significance, for its magnificent Vasai Fort, for its beautiful beaches. ( Suruchi, Kalam, Rangoan, Bhuigoan, Rajodi, and Navapur) and also for its fresh fruits and vegetables.

Today, its overgrown ruins are used as a backdrop for selfies and Bollywood movies, and children play cricket on the expanse that makes up the fort's citadel. It falls under the Archaeological Survey of India as a national monument. Sadly, little money or effort has been put into maintaining the fort. The buildings inside the fort are in ruins. The standing walls give a good idea of the floor plans of the old structures. Three chapels within the fort are still recognizable. The Archaeological Survey of India has begun restoration work on the fort, but the quality of the work has been criticized by conservation activists.

Fort can be visited anytime of the year, but the best time to visit is from October to March, as well as other places in the country when the weather is less humid and hot.

For any queries, suggestions, additions or correction to any information in this blog you can reach me at aarzoo.javed@gmail.com